Tamilnadu has perennial problems with her neighbours because she lacks a perennial source of water.
Telugu Ganga with AP
MullaPeriyar with Kerala
And Kaveri with Karnataka !
Ironically it took water, rather excess of it for all to come together !
While AP and Telengana made #ManaMadraskosam ( for our Madras) famous
Keralites responded with Anbodu Kochi and Gold FM RJ Shaan’s heartening message for Chennai that went viral..
And Bangalore, first to respond with truckloads of affection with BIG FM till today reaching out for relief …
Here’s a grateful response from a Chennaivasi to Karanataka, in particular, not to ignore others but as he says he was simply floored by trucks and tractors from Mysuru and Mandya districts, both contentious hotspots where the Cauvery skirmish rivals Dasara as an annual ritual.
A friend posted on FB earlier, do we always need a crisis to come together ?
I am happy that at least our CORE is still intact !
Thank you Bharathi for sharing Rajesh’s post.
Rajesh Ramaswamy’s post on Facebook.
I first wrote this 2 weeks back. When, one night, I’d stepped out to try and get supplies, wading through water and trying to find my way by the light of my fading mobile. Suddenly I heard a gaggle of confused voices in kannada, and discovered 2 vans stranded. It was  bunch of farmers from Tumkur who had driven all the way with relief supplies and food from their villages. They didn’t know where to go, but, guided not by GPS, but by their moral compass, they had set out to help. Over the next half hour as I helped them find their way to the relief camp, I was overcome with a wave of joy and gratitude. These were the early days of the nightmare, and the world hadn’t woken up yet to our plight.
But our neighbours hadn’t forsaken us. Bangalore was out in full force, collecting relief, sending convoys (and I was thankful to them), but this was the hinterland of Karnataka; the next day I saw trucks and vans from Shimoga and Mandya (the enfant terrible of riverine politics) and I was struck by how, at a time of distress, all humans were connected by an invisible chain that was stronger than the politicians who (mis)represent us. These villagers knew the power of water, and its ability to give life and take it away with equal felicity…and responded straight from the heart.
After all, it was water that divided us. And it was water that brought us together again.
For that, I shall be eternally grateful to the Flood. 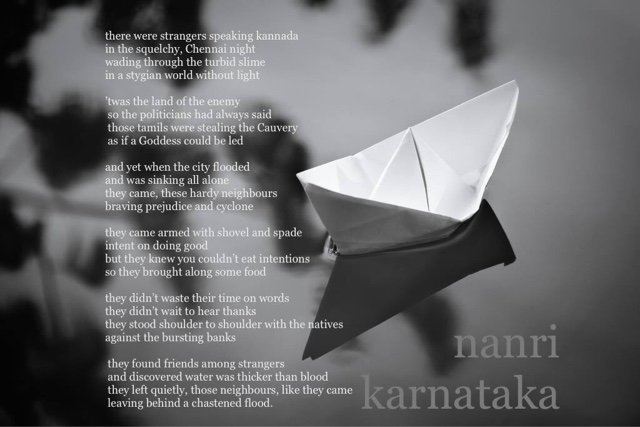